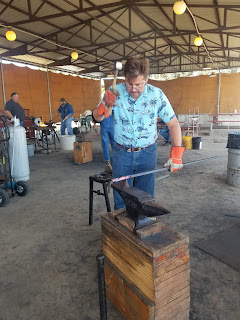 I have been trying to get this Hawaiian blacksmith to our place for a couple of years. He's really not Hawaiian, but his choice of shirts indicate that he is!

I had changed the sheets in the guest room before we went to Oklahoma, hoping he'd stop on his way to the conference,  but it didn't work out.

We had only been home from Oklahoma 1 day and look who showed up! He not only showed up but he brought his parents.

The Yoders came from Tennessee. They were traveling several states visiting family and friends. Glad we are included in that group.

It was funny after Mark took this picture, in typical mother fashion, his Mom said, "son they will know there's no fabric under that needle"!

It was so much fun pulling out a few quilts to show to a fellow quilter!

Mark's phone takes the coolest pictures. It's a Samsung Galaxy 10, with 3 cameras. 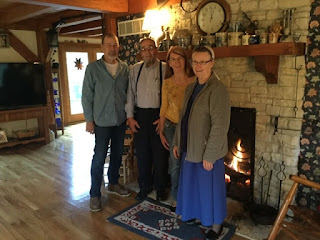 This is my adoption picture, I hope they take me! Mr. Yoder was a preacher and played a couple of church songs on his harmonica. I wished they could have stayed for the lemon pound cake I had made, but they had places to go, and people to see.

We sure enjoyed their visit!

One last picture . . . Mark took of the blacksmith shop, such a neat view!

I love your home, too! The blacksmith's shop is huge! I loved the pic of you in front of your quilt cupboard with that gorgeous quilt spread out in front.

Osage Bluff Quilter
Osage Bluff, Missouri, United States
I love being a wife, a mom, a grandmother, and a mother-in-law. If I am sewing, I am the happiest. I've been sewing since I was in the 7th grade. My blog consist of stories from my everyday life, making quilts, talking with my two adult kids, living with my blacksmith husband and some general random blogging. If you like what you read please feel free to leave a comment.