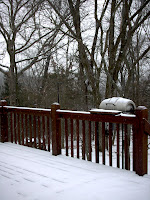 Yesterday and today, it's been nasty here in mid-Missouri. Yesterday we woke to several inches of sleet on the ground. 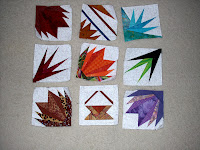 I spent the day between sewing and looking at it spit outside. About 1:30 Bentley and I went to try to shovel it from the sidewalk. We were only out there about 10 minutes when BT came home. His office was told they could leave at 1:00. He changed clothes and got the tractor to push the ice pellets around. It was a nice break to get out, as I had been sewing most of the day. I'm still sewing on the Dear Patti Quilt.

These two blocks are being sent to a blogger friend as a house warming present. She moved to Winston-Salem North Carolina. Visit Bonnie at her blog for details on how you too can send her a house warming block.

Let me tell you about the house block I made. The red flower fabric is very, very old. I was given several yards of this fabric that came out of my Grandfather Hammer's General store. This is the only picture that I have of the store, and I love it! 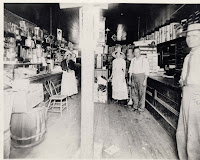 So today, guess I will sew again, unless I get brave enough to venture out of the slick stuff!

Posted by Osage Bluff Quilter at 8:59 AM No comments:

Well strike #3 never hit today. (I know the day isn't over yet).

However today I had good luck! We are planning a trip (business/pleasure) to Nashville the first of April. Today I called the Crook and Chase show and got tickets to attend a live show!

Oh and Happy Valentine's Day. AKA National chocolate Day. Of course my sweetie gave me a big heart shaped box of Russell Stover chocolates. As Forrest would say "Life is like a box of Chocolates".

*Won't we be glad when blogspot gets spell check fixed!!!!!
Posted by Osage Bluff Quilter at 6:28 PM No comments:

If I get another strike tomorrow, it will be 3 and I will be out. I actually thought yesterday's strike was enough with breaking the jam jar. Today I locked my keys in the jeep at my favorite restaurant - LaBamba's.

Of course I had to have the front parking spce too, right along the street. Luckily Lona was with me in her big Dodge truck. She drove me to where I thought BT would be eating lunch. He was there and kindly drove me home to get the only spare key we have.

I am happy to report that home key now has a new home in BT's Jeep.

After my delayed grocery and shopping trip I made it home just 25 minutes before I had to go pick Brady up from the school bus.

Tonight Jeremy, Lori and the boys were here for dinner. I set the table with my red heart placemants. Little Alex noticed right away and said hearts for Valentine day! I made Chicken and Rice and those great little carmelized Brussel Sprouts along with Caesar Salad. Carrot Cake rounded out the meal.

Thank goodness I did sew a little before I went to town at 10 AM. 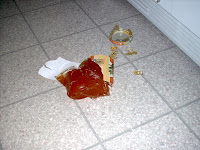 After sleeping just a few minutes longer this morning, I went downstairs to make myself some breakfast before the usual cup of Mocha Cappuccino. I reached into the refrigerator grabbed an egg, the butter, the Apricot jam and that's when it happened. The jam jar slipped from my fingers, hit the Fiesta bowl on the bottom shelf and fell to the floor, and busted, shards of glass were everywhere. It was way to early for this kind of mess.
Thank goodness, I had another jar in the pantry. Not the same great brand, but neverless something sugary sweet for an eye opener that was long over due. 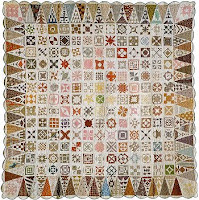 With breakfast over and caffaine in hand, 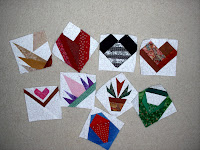 I spent a few minutes on the computer before heading upstairs to sew a little. There is an antique quilt called Dear Jane. I am making what might be called a Dear Patti version. I am making my own 200 plus blocks my way. Here is a sample of today's sewing. Now don't expect this to be done anytime soon. I work on it for awhile and then put it away for a newer project.

I took several breaks to let Bentley enjoy some free time outside in the below 20 degree temperatures. It didn't take long before he was ready to take shelter, rather inside his dog house in the kennel, or in his crate in the basement.
The afternoon was spent sewing, housework and making dinner. Afterwards we decided to keep Bentley in the basement tonight. The wind chills are to be around 0 to 5 degrees. We watched American Idol and then it will be bedtime after the news.
9:34 PM 15 degrees
Posted by Osage Bluff Quilter at 9:04 PM 1 comment:

A day of group efforts, including one numbers LVI

Here is the quilt I have been working on all week. Mom embroidered the horse blocks for Lona. Lona bought the fabric, I set it together and machine quilted it. The red fabric in the small blocks is really cute, in case you can't see it up close, it's Cowboy hats. The quilt measures 44 by 70. This was the first group effort of the day.
The second group effort happened many, many years ago. In fact LVI to be exact. (Remember your roman numerals?). In all started in the summer of 1951 when my parents (Thank you Mom and Dad) were playing hanky panky in the bedroom. Nine months later on this date I was born. Happy Birthday me!
This morning at work I was pleasantly surprised with a bouquet of fresh flowers from Sarah and Rusty. (Thanks guys!)What a great surprise and so refreshing for a windy, snowy, and cold Missouri morning. I will take a picture tonight and post it later.
As for the rest of my day, I will hang out here at work till 4:30 then go home and await my carriage for a dinner date in town.

Posted by Osage Bluff Quilter at 7:16 AM No comments: