As we went to bed Monday night, snow was coming down fast. Big wet flakes were falling. I woke at 2:30 AM to no electricity. 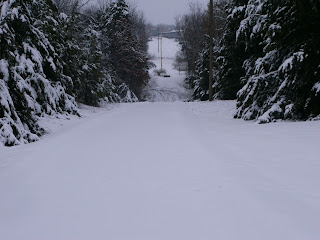 At 7:00 AM I went outside. I first saw this tree across our road. I thought it might be the reason for no electricity. 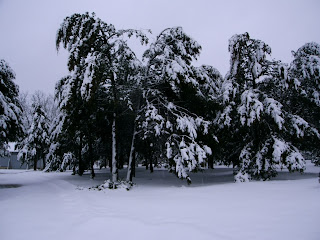 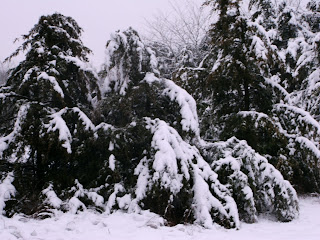 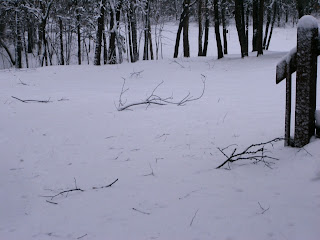 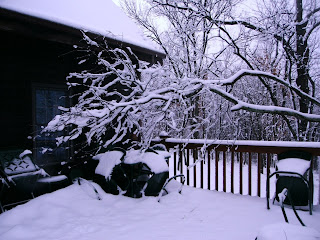 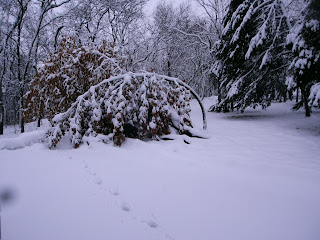 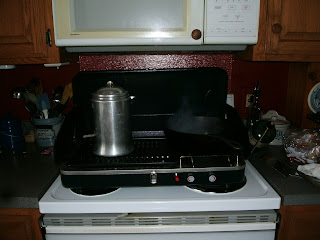 This is how we made breakfast. Of course this was after we got the chain saw started to cut the tree off the road, put chains on the tractor, and shoveled a path out the front door. 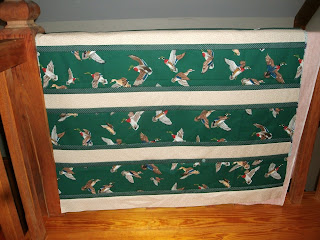 Later to entertain myself I used Cranky to make another quilt top. What you see here is just half of it. The other half is on the back side of the banister. 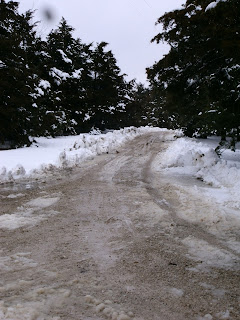 Another 6 inches of wet snow on the 6 or so inches we already had, made for some tough removal. More might be on the way tonight. Tomorrow will be a work day for me. I work at the Electric Cooperative. At one point today they had 4500 customers without service. Back up crews have been called in from other cooperatives.

Power at our house was restored 13 hours later. Many thanks go out to the linemen who are working long hard hours.

The sewing began on Friday. 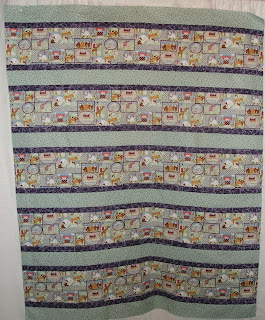 I picked up this quilt fabric at the guild meeting last week. It was already cut into strips.  After I made it, I thought hey, piece of cake.

So I dug into my fabric bins (yes I have more than one tote of fabric) and came up with the following: 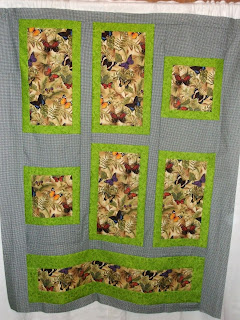 This didn't photograph near as pretty as it really is. The border fabric is tiny black and white hounds tooth print. I remember buying this butterfly fabric. I sent a fat quarter to my friend Cathy in Australia years ago. 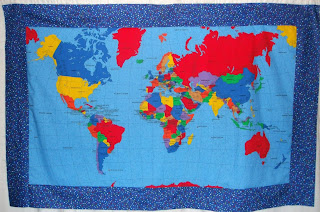 My friend Maggie gave me this map print along with yards of coordinating fabric. All I had to do was sew the border on. 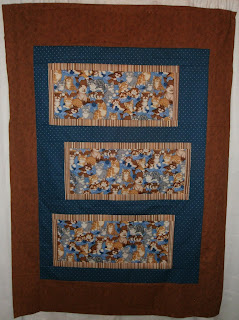 This kitten fabric was used to make a table runner for my cousin Dixie.

Four quilts in 3 days, one crank at a time.

The top quilt is a donation for foster babies. I'm not sure what I'll do with the other ones.  First they will all have to be machine quilted.

It's all in a day or two of cranking!

Yesterday it was a state of emergency!!! 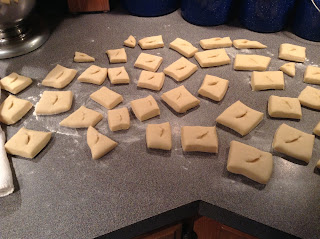 I was up at 7 Am or maybe a little before. Thank you Bentley dog for having to go out so early. Anyway, I decided to make some Fastnachtskuckens, or beignets, or donuts, what ever you want to call them.

It was cold outside. A beautiful sun rise was present. 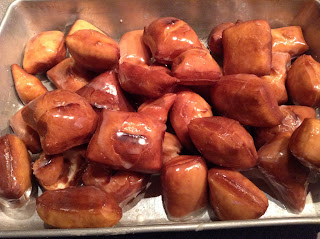 Here is the finished product. This time I did a powdered sugar glaze. If you want the recipe, I've shared it before here. 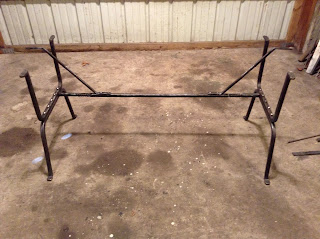 I made several trips to the shop to see how my table was progressing. 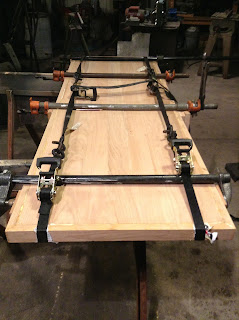 Here is the top all glued up. It will hold my vintage sewing machines. 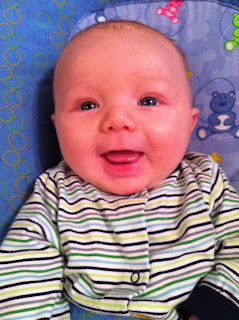 I then got this texted to me. So I just sat and drooled over this cute little guy. 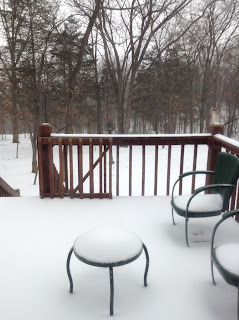 Oh, did I forget to tell you that this was building up as I enjoyed my morning. Snow, sleet, thunder, lightening, and more of that over and over and over.

It was then that the governor declared Missouri was in a state of emergency. We ended up with about 6 inches of the mix.

So then the blacksmith had to do this!
Posted by Osage Bluff Quilter at 5:34 PM 7 comments:

I am really getting into vintage sewing machines. I just may have someone following in my footsteps too -  a 3 year old grand daughter!

Here Miss Lizzie is sewing on a 1931 Singer, that is older than both of us added together. With her using a hand crank model, I think she is pretty safe from serious injury. I love how her mother captured the look on her face, when she looks at me for approval!


The blacksmith is helping Miss Lizzie master the pedal of this 1920's Franklin treadle. This machine has been in his family longer than he has.

Where have I been???

My son asked me the other day, "Mom did you give up blogging for Lent?"

I thought, wow is it Lent already?  I've been so busy with just stuff, the time has been flying by.

I finished hand quilting one quilt last week and immediately put another one in the  frame. It is such a fun quilt to do that I told the blacksmith, "I may not clean the house or cook until I get it out of the frame".

Between quilting, taking care of the grand kids, super bowl party, canning soup, sewing machine shopping, and a road trip, life has been busy. Oh yes, throw my birthday in there too! 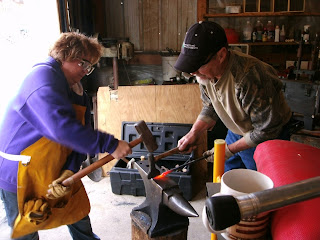 This past Saturday  my blacksmith was teaching Erin (and several others) some basic blacksmithing techniques, in Fulton, MO. 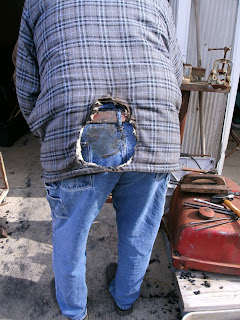 There were some that got a little too close to their work too! Guess I could say Ken had a hot butt! 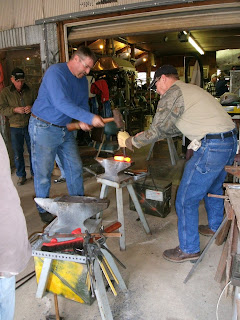 It's always fun for me to watch a tag team. Here Ken and Bernie work on a hammer eye punch.

I left the ladies in the house at the hammer in, and took off for an antique shop in downtown Fulton, Cornerstone Antiques. I had a date with a featherweight machine.

I have been looking for a vintage Singer featherweight machine for over a year now. I found one on Etsy Friday and called about it. 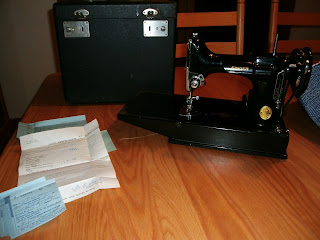 The machine is almost perfect. It needs a new cord and a repair on the light. Nothing the blacksmith can't handle.

I am so excited! 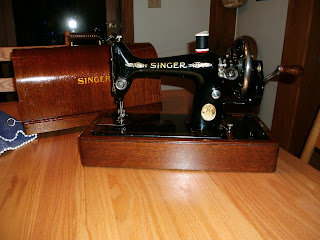 We then took a road trip to northern Missouri to pic up this gal!

Our friend Phil restored this 1931 hand crank Singer 99 machine for me. Even the case is restored. It's beautiful!

We spent the night with our friends, Phil and Margie. Sunday morning after a great breakfast of Margie's farm fresh eggs, bacon, and homemade sour dough bread made into skillet toast, we headed off for their church, Hamilton First Baptist Church.

Phil told me this would not be like my former my southern Baptist church. The congregation welcomed us with open arms. Then the music started. There was one gentlemen playing the guitar, two women, a teenager and one bass vocalist singing. The music was not any of the hymns I had ever heard. About the third song Margie leaned over and said something about "Oh brother where are thou".   Now you probably know, that movie is about the most favorite movie of the blacksmith and I. We have it on CD, VCR,  and several copies of both of the music CD's.


If it weren't so far, I'd drive there every week for church.