Too much Birthday party

I was up at 6 AM for work, after 17 years this will be my last day to get up at that hour. You see we are changing our business hours to be opening a half hour later. But tomorrow I'm off anyway so I won't try out the new hours until Wednesday.

About 8:15 I called Jeremy's cell phone and he sleepily answered, I asked if he was sick, but he told me poor little Brady got sick and threw up most all night long. I guess it's the flu bug Alex had last week. Brady wasn't even up to enjoying his new toys.

Julie and I celebrated our last hour long lunch together with to go from LaBamba. If only we could have gotten a Margarita to go.

After dinner I worked on some quilt patterns with the scanner and printer. Then I took a ride over to see little Mr No Name's new bedroom. Eric and Kathy are expecting his arrival Aug 13. BT is wanting them to hold off till his B-day August 24, but I don't think I can talk them into that. Back home I was just finishing my cappuccino when Eric and Kathy came over to see my new log bed. They then went to the shop where BT made Eric a hand forged tool to work on his traps with.

You know if rained at the Lake of the Ozarks today and not a drop here.
10:21 76 degrees and bone dry.
Posted by Osage Bluff Quilter at 10:12 PM No comments:

A slow start to a nice day, that's all I can say. I was up just before 8 AM and made a pot of coffee, fed the dog, tried to take Sarah's dog Josie outside but she wanted nothing to do with me and went for the big paper. You can tell school is about to start, that made up about 95% of the ads today. I enjoyed my Mocha Cappuccino with the paper. Tom Monat and Forrest came by to pick up the carpet remnant we gave Forrest. BT and I loaded our vehicles with stuff for the fish fry. Let's just call this a breakfast free morning. 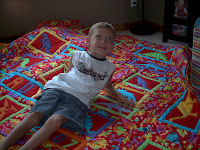 I arrived at the party about an hour after BT and just before noon. The day was sunny and hot. Water toys were set up all over the yard and plenty of soaker water guns. Lona set up the slip and slide. 22 people were there to enjoy the day. The meal was fried blue catfish, chicken strips and all the trimming. And not to forget Brady's Mickey Mouse cake. When Brady opened his quilt I had made for him, little Alex said "I have one of those too" and quickly ran to his room for his quilt from Dammaw. Nothing doing, he wanted his picture taken with Brady after he completely spread his quilt out.

BT and I headed home around 4. I had laundry, he had rusty metal to unload and clean up. I worked on the black and white quilt, I think I about have it figured out. We took a break about 6 and had a drink on the deck. Bentley enjoyed his ice cubes with us. By 7 we had crashed in the living room. Sarah called at 9:24, they had just walked in, a little over 6 hours back home. It was so good to see them, I only wish we could have spent more time together. 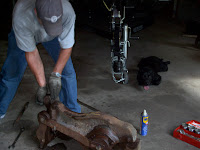 Saturday morning and I was up at 7:30, why I don't know. The kids got in a little after 3:00 AM and I had been awake off and on for over an hour waiting to hear their footsteps. Sarah got up about 8:20 and took her dog outside while I feed Bentley. Then she introduced them to each other. BT got up about the same time and drank a quick couple of cups of coffee. As Sarah headed to her hair appointment, BT went to Eldon to try to buy some rusty iron at an auction.

I put off my cappuccino, fearing I'd wake up Rusty sleeping upstairs. After surfing for about an hour I went upstairs to do some sewing for Kathy and Kathy. Two repairs jobs in one week and they are both for Kathy's. Finally at 10:30 I had to go for the caffeine. BT called shortly after that and had gotten the #10 Edward Shear for only $80. What a bargain since they are going on EBay for over $300. It cost him $5 for the guy with the wrecker to load it on his trailer.

By 1:00 we had all had Bagels, coffee, juice and the morning paper so we headed for the Osage River with the boat and a cooler. The river water was a comfortable 82 degrees. Very few boats were out and finally the sun had parched us enough and we all had to get wet. I was the keeper of the boat, by holding onto the front rope. We floated for several miles. The cooler was loaded with a few beers, green tea coolers and diet coke. We headed back in about 4 pm, took showers and crashed for a few hours.

While everyone rested I called Madison's and made reservations for 6:30. BT, myself, Jeremy and the boys arrived there first. Alex was ready for the bread and butter on the table. Lori, Sarah and Rusty joined us about 15 minutes later. We ordered potato skins and Angry shrimp appetizers. The shrimp was Cajun batter fried and served with a tangy chipotle raspberry jelly. But when the waiter came he had made a mistake and gave us Shrimp Katherine which is
gulf shrimp sautéed in a heavy cream sauce with a touch of white wine and fresh garlic served with garlic toast. I was in heaven with 2 kinds of shrimp. Lori and Sarah ordered their usual, Mannicotti and baked Mosticioli. Rusty and Brady had toasted Ravioli which made me think of Rita, she always enjoyed that. I ordered Chicken Marsala, Jeremy had 16 oz of Charbroiled Prime Rib and for BT, Beef Bordlaise, being the carnivorous eaters they are. After Alex finished his bread, bread and more bread he ate chicken strips and french fries. Of course Grandpa ordered them each a scoop of ice cream since they had happy plates. The rest of us had to wobble out the front door.

We all said our goodbyes out front in the hot humid temperatures. BT and I strolled the 3 blocks of High Street checking out the Old Car show. I saw several 1957 Chevrolet's I wanted to drive home, including one black and silver convertible! Sarah and Rusty went to meet up with friends from their days at KRCG while Jeremy and Lori did some last minute shopping for the big Birthday party tomorrow. And us old folks, well here we are just each on our computer.........

Anticipation, that's right Sarah and Rusty are due home in just a couple of hours. Their first trip back since they moved to Oklahoma City. So I've cleaned, bought a new shower curtain, installed a new oak toilet ring and I even bought them gifts and placed them on their pillow. You ask what is the gift. I bought them each license plates for the front of their cars from their respective colleges. Go Tigers. and Go Gators.

It will be a busy weekend. Sarah has a hair appointment in the morning. We'd like to go to the river in the afternoon. Then there is church at 5:30 and Madison's after that. madisonscafe.com Sunday is Brady's 6th Birthday party. A Fish Fry at 1:00.

Today started with a couple of loads of laundry before 8. Then after my morning ritual of Mocha Cappuccino, I headed to town. My first stop was to mail off my EBay sale. Can you believe someone paid $20 for 50 empty boxes from my Holy Herd Collection? Next stop Lowe's for one more kitchen light. Lightening has come such a long way since we built this house in 1993. We replaced the one over the sink earlier in the week, now we are tacking down the old canister track light. I run into Penney's to see if I can find something to spend my $10 coupon on. There was a pair of $40 Sandals calling my name, after subtracting the sale price and redeeming my $10 coupon, I paid $14 for them. Grocery shopping was now awaiting me, then one quick stop at the Habitat store to check for glass globes to update and fan. (to no avail).

At home by 1:00 I quickly run the vacuum and finish the laundry. I cut a fresh chicken in half and season it with Jamaican Jerk spices. At 3:30 just after I light the BBQ pit, BT arrives home. I forget Friday's are short days for them during the summer. He takes over the BBQ of the chicken, after he starts a batch of charcoal in the 55 gallon drum at the barn. You can't beat his homemade charcoal for real tasty food. When the chicken is finished, I slice the last of my tomatoes from Diane and make a bowl of spicy Cole slaw. What a tasty meal.

78 degrees and all the rain is staying north of here.

Well so much for my first blog page. Please check back often. Hopefully I can keep it updated.

Posted by Osage Bluff Quilter at 9:06 PM No comments: