Let's just say it's a 7 year itch.  Of course I fully expect it to last much longer. However it's been almost 7 years since I fell in love with old sewing machines. 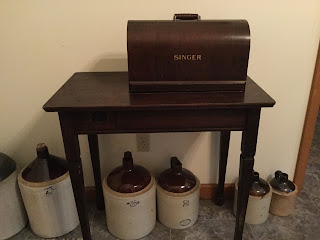 The seller said it had been donated to her church at Lake of the Ozarks and she purchased it with hopes of sewing. She never followed  through on the sewing part. 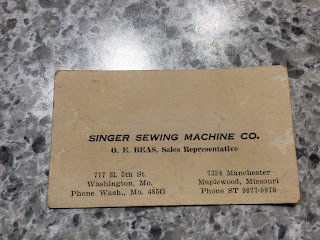 This was in the drawer. The drawer that locks with the same key that keeps the cover on the machine!

I always like to find out the history on any machine I acquire. I found  Oliver E. Beas (1928-2002) from Washington Missouri served in the United States Navy during World War II. He was an electrician mate third class. This could possibly be the same man?. 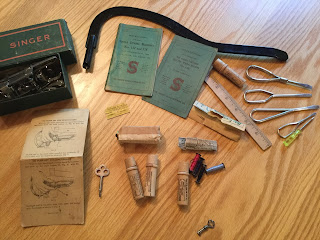 The knee bar in the top of the picture is a gem. A lot of times you'll find the old machines with that missing.

This machine actually has two. One can be used when the machine is set down into the table. The other is for table top sewing. 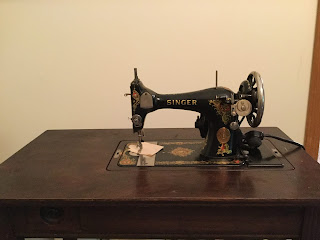 If my counting is correct this might be machine #22.

Posted by Osage Bluff Quilter at 10:01 AM No comments:

If this quilt could talk

My friends, Pat McCarty, Jim McCarty, and Karen McCarty Wright lost their mother December 12, 2018 at 88 years young. Evelyn L.  McCarty, "Dolly" as she was known to friends, was a well known quilter. Not only did she piece quilts, and design them, but she published numerous articles on making quilts. She also was a collector of sewing machines (be still my heart) and fabrics. Unfortunately I was never able to meet her in person. 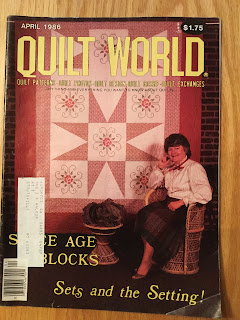 This is a picture of her on the cover of this April 1986 quilt magazine. Her article inside is entitled Sets and the Setting! a series of three articles that answer the needle worker's lament - I've embroidered a set of quilt blocks - what do I do now?"

When the family was dividing up her quilts, all the quilts and tops were placed on her bed. Each of the 6 children from oldest to youngest were able to pick one piece in rotation. It kept going until all were gone.

Son Pat noticed sister Karen had picked the "anvil" quilt as his mother had called it. Pat said to Karen, "Mom always called that the anvil quilt". You see Pat is a blacksmith.  Karen knew he must have over looked it, so she traded him.

Pat asked if I would finish it for him. 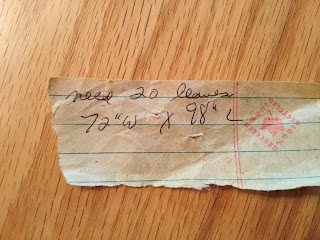 This was a note Dolly had safety-pinned to the corner of the quilt top. 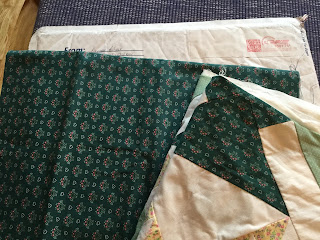 First of all I had to find matching fabric. I asked a friend who deals in vintage fabric where on Facebook I might ask for help. She gave me a link. Two hours after I posted a picture of the fabric, a quilter from Rhode Island came to my rescue. She sent me 3/4 of a yard FREE. I in turn sent her one of my quilt charm necklaces as a token of my appreciation. 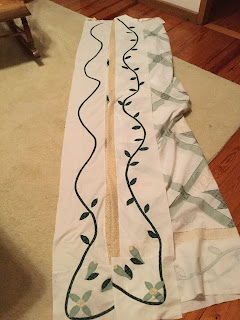 The next problem . . . I don't hand applique. However in our circle of blacksmith friends I knew Eileen S. did. I asked her if she was up to the task and she heartily agreed. 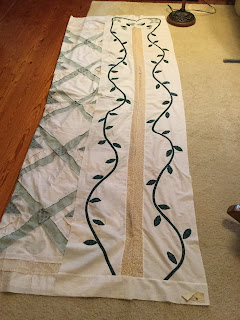 Here it is after Eileen added the 20 leaves. 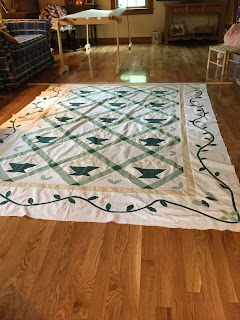 Ready for the quilting frame. 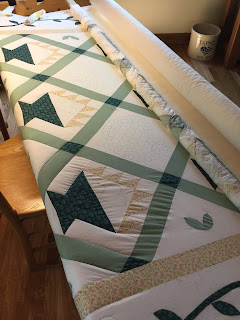 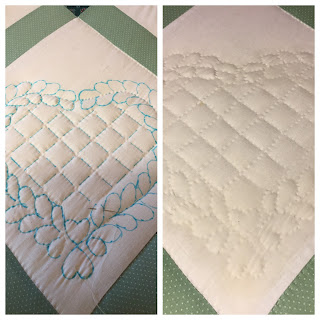 I wanted the solid off white  blocks to have tons of quilting. This heart design really made it pop! 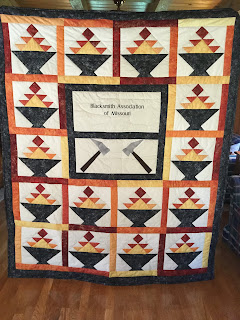 In the meantime, since Pat called this the anvil quilt (It's really called a flower basket) I figured I could use the pattern to make a quilt for our Blacksmith Association conference auction. 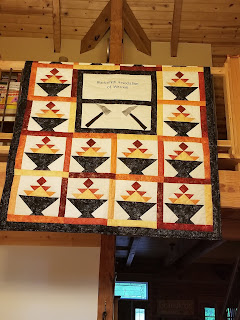 Here it is in Bob and Sheri S.'s  loft. They were the high bidders at the Blacksmith Association of Missouri conference !!! 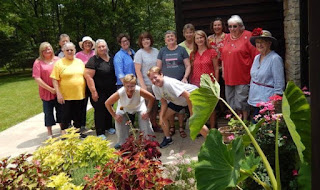 July 25th we had a gathering of over 70 blacksmiths and their wives at our house and shop for a hammer in. 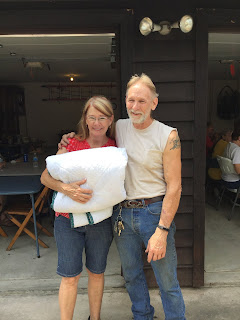 I thought this would be the perfect time to present it to Pat, since several members had a hand in its completion. I'm not sure who's eyes were the wettest! 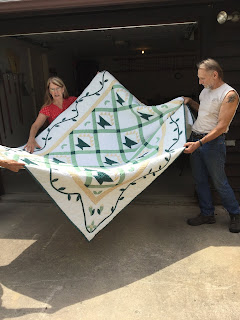 Showing it off to everyone. 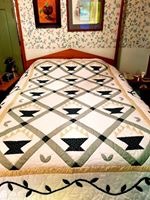 Now it's home on Pat's bed. I know his sister Karen is happy that she traded with him. Of course, his Mother is smiling down on it too!