If I were a kid, that would be like a snow day! Actually here today,, it's both.

Here are the two lap quilts I completed for my sister. Mother embroidered the horse blocks and I put them together and then machine quilted them.

Here is a darling baby quilt I just finished piecing. It has a total of 1063 pieces in it. You might think it's for the princess we are expecting in April. Well it could be. However there is a
co-worker's of BT that is expecting her second child. If it's a girl she will get this. Otherwise, you can bet the granddaughter will get it. 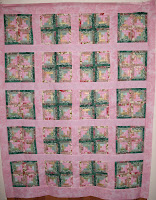 All dressed up and no place to go. Have you heard that before? That's me this morning. I got up at 6 AM, washed my hair, applied make up, got dressed, fed the dog, and was enjoying my mocha Cappuccino when my co-worker called and told me I didn't need to come in. YIPPEE!

It's 17 degrees, icy and more ice and snow is headed this way. What's a girl to do? SEW.

I will try to do another post later today. Yesterday I finished the second lap quilt for my sister. I will get some pictures and post them. I am also working on a pink and green log cabin baby quilt.

This is what the boys hope to do later today. 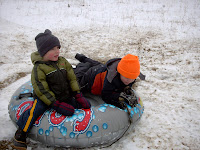 So thanks Julie for giving me another day to sew!

Keep warm and safe!
Posted by Osage Bluff Quilter at 7:06 AM No comments: 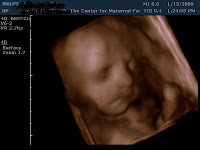 Isn't she a doll? Last week the DIL asked me to go with her for a 3-D ultra sound. What an hour of joy we had looking at this tiny miracle.

They were well over half way into the picture taking when they said "girl". The technician said she was 99% sure. Since the first ultra sound also said it was a girl, we are going with pink!

The little girl showed us her karate tricks, played possum and in the end gave us the letter C with her fingers. Thus confirming she is baby C. Since she has brother A and B at home we knew just what she was talking about.

Her last little trick was to put her finger on the top of her head as if to question why we were making such a fuss over her.

We now need to concentrate on a name and doing some sewing! She is due april 4th.
Posted by Osage Bluff Quilter at 8:49 PM 5 comments:

One chance left to get something for free!

I only have one spot left for my pay it forward give away. Be the next one to sign up and you could win something hand made from me!

See my post Here .
Posted by Osage Bluff Quilter at 7:24 PM No comments: 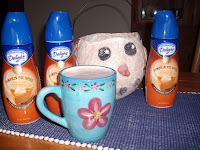 Well it's a temporary friend. My daughter introduced me to Pumpkin Pie Spice Coffee creamer. We tried to find it in her town after the holidays, but there was no Pumpkin flavor to be found.


When I returned to Mid-Mo I happened to mention it to my co-worker, Julie. Last night she was shopping at Target and saw it in the dairy case. Not only did she call me to ask if I wanted some, but she delivered it to my front door. What a friend!

No she's not the temporary friend, the creamer is. It's only here for the holidays. But I have three bottles now, and they don't expire until May 2009!

Oh and I forgot to tell you, put this creamer in a strong cup of Java, and it taste just like the expensive stuff at Starbucks. It's even good in a latte, OMG Pumpkin Lattes!

Speaking of friends, I lost an old friend several weeks ago. We had been friends since the very early 70's. We met at T.G.&Y. For you that don't know, that was a really cool Five and Dime store. It sold everything from fabric, clothing, pot and pans, Matchbox cars for 55 cents, jewelry. It was like the super duper wal-marts of today. Only much more friendly.

That is where I purchased this friend for my hope chest. 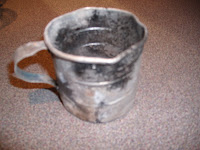 Yes this 1 cup measuring cup. But as faith would have it, we have been reunited. Yes she's a little more tattered and worn. It seems somehow during the holiday baking, she got lost and ended up in the trash burn barrel. There she hid out for about 3 weeks. 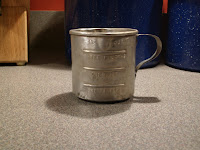 Earlier in the week, I was outside and happened to glance in the burn barrel and there she layed. Crying out for my help. I took her inside where I gentley brushed the soot off with a brillo pad. BT used a soft wooden handle to smooth out her wrinkles and we soaked her in some vinegar. Once again she will grace my kitchen drawer. I only hope she can be by my side another 39 years.
Posted by Osage Bluff Quilter at 8:21 AM 4 comments:

QUILTERS check out this awesome store

This past weekend we went visiting to the historic town of Guthrie Oklahoma. While walking Oklahoma Avenue, I stumbled upon the quilt shop, Extra-special. It is to die for. Beautiful western fabric. Horse fabric just bolt, after bolt, after bolt. Boxes of fat quarters. Of which I took a few home for my quilter friend in Australia.

Stop by and give it a look!
Posted by Osage Bluff Quilter at 7:09 AM No comments: 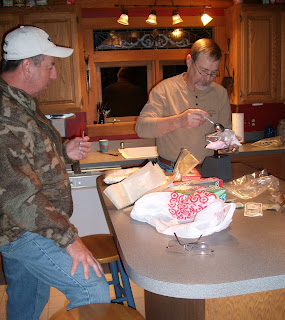 Soon it will be time to make the deer sausage. Here BT is dividing the spices with Tim. We like to share with our friends.

Although this looks like a drug deal going down....... scales, baggies, money, white powder.

Making sausage is a long process. But in the end it's well worth the wait.
Posted by Osage Bluff Quilter at 9:47 PM 1 comment:

I've just returned from a 4 day trip to Edmond OK to have Christmas with the daughter.

Now I'm home battling a head cold that I didn't leave behind in Oklahoma.

My Mom is in the hospital. We will find out tomorrow if she needs surgery.

So bear with me, I'll have a post with lots of pictures real soon.
Posted by Osage Bluff Quilter at 9:39 PM 2 comments: